The ordination ceremony (with some small variations from place to place) follows the following stages. You will have the chance to familiarize yourself with the stages in rehearsal during the week before your ordination. When you click on the links below, you can download the chanting that belongs to each stage. When you click the PDF Icon on the right of the link you can read the text of the chanting. Or, you can download our app to practice chanting on-the-go.

The circumambulation is a ceremony to pay respect to the Triple Gem. By circumanbulating the chapel, clock wise, in procession is to contemplate the great virtue of the Lord of Buddha, the Dhamma and the Sangha. 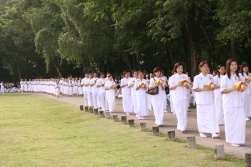 After the ordinands have shaved their head, their beard and their eyebrows, cut their finger nails and toe nails and dress smartly, they will receive a bouquet of three lotus, candle and incenses and clasp it between their hands in a gesture of prayer. They will form a line following the instruction to walk to the north side of the chapel according to ordinal number. The line will start on the right with the ordinand with the highest seniority 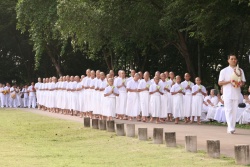 Ordinand(s) who received His Majesty King Bhumibol Adulyadej’s Triple Robes will stand in the first row, 2 meters away from the second row. Then between the second and the other rows, the distance should be 1 meter apart. 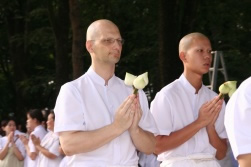 During the circumambulation of the ordination hall, the ordinands should meditate upon the virtues of the Triple Gem by chanting “Iitioiso”, walk calmly with their eyes looking down, keeping a pure and virtuous mind and visualize a clear bright crystal ball floating in the centre of their body.

Chanting during circumambulation of the temple 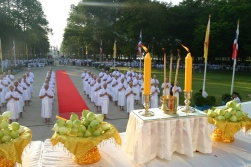 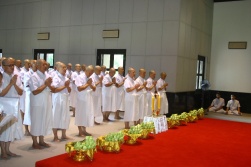 1.Paying Homage to the ordination ground and chapel

Paying Homage to Principle(main) Buddha image is to pay a highest respect to the Buddha image which represents the Lord of Buddha. 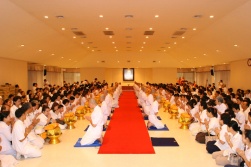 Pabbjja is the method of applying to be a priest by chanting with the highest respect to the Triple Gem, which are the Lord of Buddha, the Dhamma and the Sangha, to the preceptor. 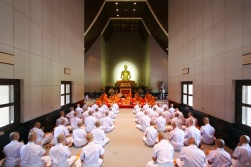 The preceptor instructs applicants in the Triple Gems, advise them to develop conviction in it as, their refuge and reminds them of the purpose and benefits of ordination. After that he teaches applicants the five basic objects of meditation, (which are Kesa = hair on the head, Loma = hair, Nakha = nail, Danta = teeth and Taco skin, Mulakarnrnatthana or Tacapancakakaininatthana) 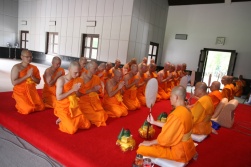 Taking Refuge and Ten Precepts is the request for the refuge from Triple Gem and accept Ten Precepts for studying and practice. Ten Precepts are training rules which help us to maintain a proper body action, verbal action and ideal conducts of our mind. 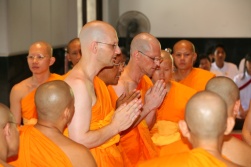 Requesting Dependence is to request for a dependence, his guidance, his protection, his teaching and his education, from the preceptor. 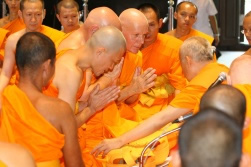 7.Scrutiny of the bowl and robes

The preceptor will explain the four requisites as follow; Patio (the bowl), Sanghati, Uttarasango(Civara), Aiitaravasago, (the under robe). Novices continue by acknowledging their requisites with the words “Ama bhante” 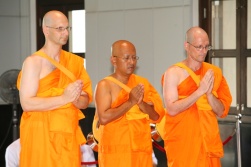 8.Examination outside the Sangha

The novice is to stand facing the assembled Bhikkus, hands joined in the gesture of anjali one feet from the cloth, to go round this cloth and not to tread on it.(The second and the third novices follow the same procedure.) Now a number of questions will be asked in Pali language, which the Novice should answer 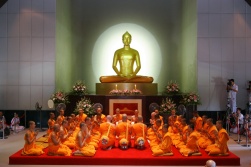 When called, novices will walk around the special cloth and walk toward the platform. Climbing on to the platform with their left knees and walk on their knees, stop between first pair or Sangka. Bow 3 times, and then chant Requesting Ordination (Upasampada).